I recently met Wayne again after almost 20 years. We used to work together. He was in supported employment and I was the “Speechie” there. Wayne is deaf and was a fluent sign user, mostly relying on fingerspelling. He also used a speech generating communicator called a Lightwriter which was great for people who didn’t fingerspell. He was very social and lots of fun. He had a great sense of humour. Last I heard he was living in the community, travelling independently and still working. I met him recently at a meeting. The first thing he signed to me was that he was married! He was so happy, his grin said it all. His wife Cathy is also profoundly deaf and they live in a nursing home as Cathy uses a wheelchair and needs daily physical support. 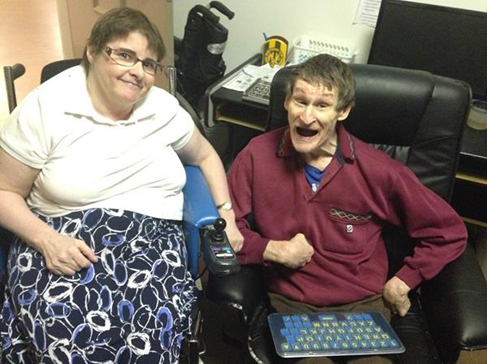 I had trouble “reading” Wayne’s fingerspelling as he now has crippling arthritis. He no longer had his Lightwriter. Over the years, his communication had gradually reduced to the point where only Cathy could read his signing and communication was very slow. I thought of all the instances during Wayne’s day when he would not be able to interact with people; travelling on the bus, talking to co-workers, buying a pie, celebrating success of his beloved Hawks, chatting over lunch with friends, talking to his sister, socialising at home with nursing staff and housemates.

After drawing the alphabet on a piece of paper and having a conversation with Wayne and his sister using this “board”, they agreed that communication was so much quicker and clearer and that it would be useful when he was “out and about”. Two weeks later Wayne received a Frenchay Alphabet Board (FAB) from Scope’s Non Electronic Communication Aid Scheme (NECAS). It is just the alphabet on a perspex board but it was like magic for Wayne and Cathy. Wayne is never without it, it lives in the basket of his walker. Cathy says it has made their conversations “wonderful” and that Wayne was so excited to be able to order his own dinner at home instead of Cathy ordering for him.

The next step for Wayne is to look at a voice output device again so that he can make his voice heard again in the community. It made me think about how small things can make a big difference and each communication aid or visual display in the community can have a huge impact. Also, the benefits go both ways. Wayne has greater access to his community and Wayne’s community now have access to his lovely personality and he can brighten someone’s day with his great sense of humour. 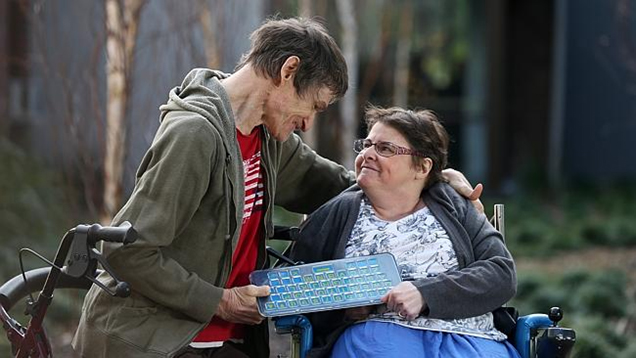